Combining a renowned Swiss watch brand, born in Cuba, with a world-class cigar bestseller could only give birth to an elegant and unique product. Welcome to the Macanudo Inspirado Cuervo y Sobrinos watch with its very symbolic orange colors. But be hurry : it’s a limited edition !

Last November, in Copenhagen, in the cosy lounge of the Cigar Shop Macanudo, a few privileged guests attended the worldwide launch of the Macanudo Inspirado Cuervo y Sobrinos, a luxury automatic watch inspired by the love of cigar. How did the two prestigious brands meet? The original idea comes from the hearty Marko Bilic, a very active Croatian aficionado, creator of the Cigar Smoking World Championship and president of the Cigar Club Mareva, delight of every Split puros enthusiast :« I always believe in the power of joined force, as the success of CSWC and club Mareva proved me that. True power of CSWC is always and had been always in connecting people and building new friendships which many times resulted in business partnership. When CyS joined CSWC as official time keeper, we already knew its strong history connection with cigars. On the other side we had Macanudo, as our main partner of CSWC in charge of making a competition cigar. Both of the brands are run by the amazing people, who are so creative and open mind professionals. The idea of the Macanudo watch idea came to me during the award giving ceremony to the winners on CSWC in grand final 2015, when both of them step on the stage with their prize products for the winners. Then, the spark of CyS Macanudo watch just lighted up in my mind. »

Maria Luisa Giannini, Managing Director of Cuervo y Sobrinos, a watch brand born in Havana and which celebrated its 135th anniversary last year, underlines the infrangible link between this brand and the world of cigars : « The Cuervo y Sobrinos brand is naturally related to the cigars world thanks to its Cuban heritage. In fact, as you surely know, our main watch collection has name of cigars : Esplendidos, Robusto, Prominente. The Cigar connection has been kept alive until the « prohibition » of smoking became a sad reality almost everywhere. For a few years the owner decided not to promote the cigar connection to avoid possible reaction from the world of non-smokers. On the other hand, I was always being contacted by cigars producers and others, until I decided to sponsor the first time a cigar tournament in Tallin under the Cigar Smoking World Championship and I discovered that our « natural connection » was totally alive and I started again building up our relations with cigar smokers, lounges, and any other entity related to the cigars. » Created exclusively for the Macanudo Inspirado brand, the watch uses its famous orange-coloured codes and even has its name engraved on the oscillating weight. « We have paid particular attention to this jewel, which was produced in only 50 copies » concludes Ms. Giannini enthusiastically.

Each watch costs 3250€. A small sum of money for such an exclusive product. « Our objective was not to make the most expensive watch, it was to create a watch that is affordable for a larger group of people » says Scandinavian Tobacco Group’s devotee team of designers and distributors of Macanudo Inspirado. Mark Renard, STG’S International Marketing Manager explains : « We think that our Macanudo cigars are accessible for a large group of people who like to enjoy a cigar. Together with Cuervo y Sobrinos we choose high quality elements for the watch, making sure that the price would still be attractive. We have created 50 watches, and at this point we first want to see the success of the edition and evaluate that before looking into another edition. » Where can you find this little marvel sold – smashing detail – in a very beautiful humidor ? For the moment at Club Macanudo in New York, the legendary Hajenius boutique in Amsterdam and the Cigar Shop Macanudo in Copenhagen. Better be a globetrotter…

Humipack, perfect for this summer ! 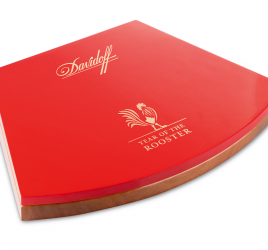 Does the rooster smoke cigars ?